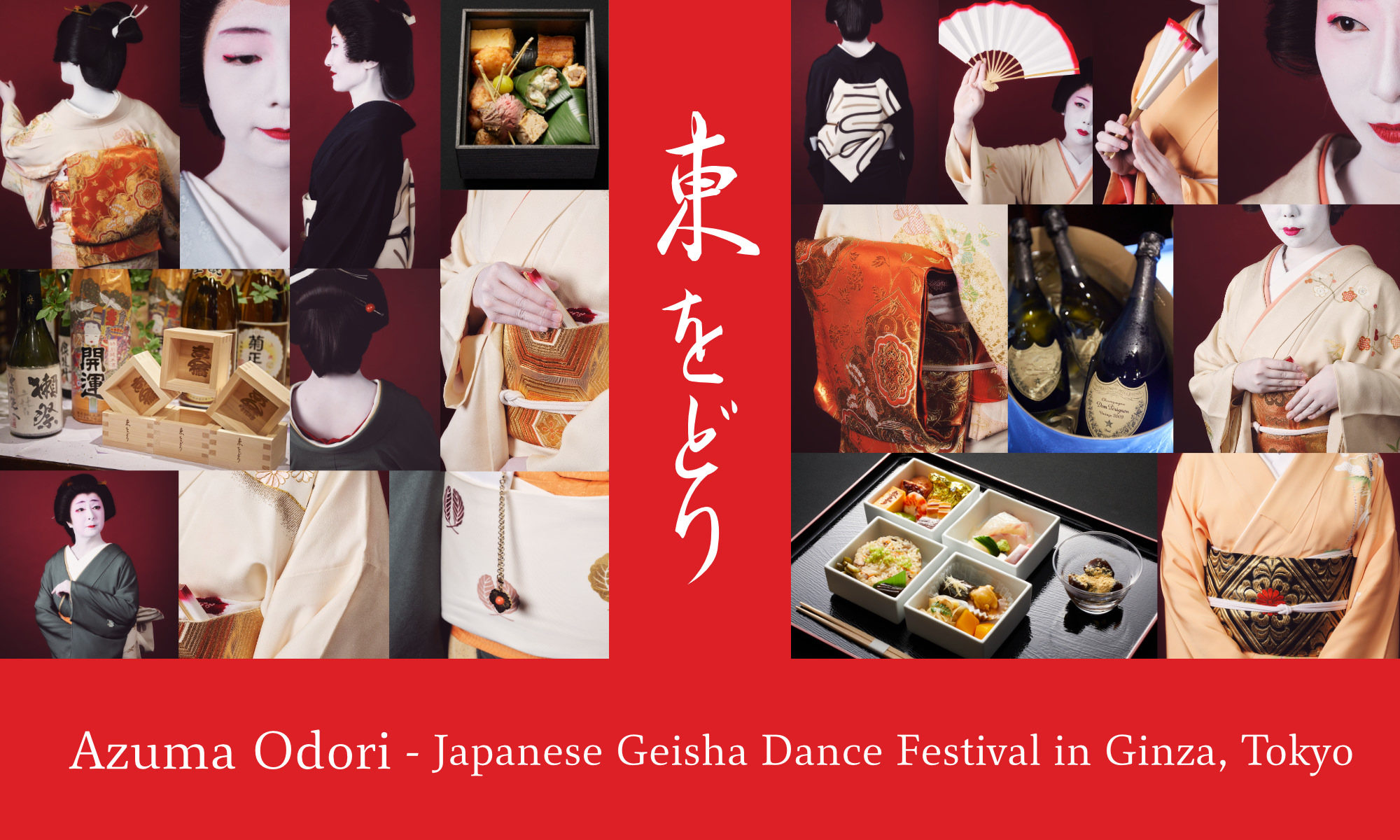 * This year’s tea ceremony is cancelled due to the Covid-19.
* Please cooperate with wearing a mask.
* Please refrain from visiting the theater if you have a fever above 37.5°C or symptoms such as coughing, sore throat, or headache.

Azuma Odori is a traditional geisha stage performance which dates back to 1925. The world of geisha is known to be very exclusive, and it can be hard to gain access to their performances or experience the accompanying traditional cuisine (ryotei cuisine). Azuma Odori, however, offers a unique chance to experience the stylish and glamorous dances of the geisha in an accessible way, while being served delicious ryotei dishes and drinks.

Additionally, visitors can participate in a tea ceremony led by geisha on the lobby floor of the theater and there is also the option to take a commemorative photo with the performers.

The Shinbashi Geisha district extends from Higashi-Ginza to the Tsukiji district. It is composed of high-end restaurants (ryotei and chaya) and geisha establishments (okiya). The name Shinbashi (“new bridge”) refers to a bridge across the former Shiodome River, which was built as part of an early urban development project during the final years of the Edo period (1603-1867). The name Shinbashi came to be used to refer to the 8th Ginza district (ginza hacchome), an area associated with elegance and westernization. Similarly, Shinbashi Geisha may be considered relatively modern yet elegant.

The History of Shinbashi and Azuma Odori

The Shinbashi Geisha district emerged during the final years of the Edo period (1603-1867). During this time Edo (now Tokyo) was still ruled by the Tokugawa family. Shinbashi however, welcomed warriors belonging to the opposing domains of Satsuma and Choshu. During the Meiji era (1868–1912), these domains became politically very powerful and Shinbashi developed greatly, turning into a center for first-class art. The Shinbashi Enbujo Theater was built in 1925, and on its opening night geishas performed Azuma Odori.

The theater burned down during the Second World War (1939–1945) but was rebuilt in 1948 and reopened with the 15th Azuma Odori performance. The theater soon became popular due to its extravagant shows. The geisha Marichiyo in particular became a star and her performance as a handsome male made her famous not only among the patrons of Shinbashi but also among men and women of the general public. Marichiyo enjoyed continuous popularity until her retirement as a geisha in 1971.

Azuma Odori also features screenplays by famous writers such as Kawabata Yasunari and Yoshikawa Eiji. Every year its program changes, featuring a mix of classics and new pieces, but always concluding with all the geisha in their formal kimono performing the lively song and dance “sawagi”.

Working as a Geisha

Each Shinbashi Geisha belongs to a particular geisha establishment (okiya). They are often invited by ryotei restaurants to perform at banquets. They are called geisha (“art person”) because they are masters of many traditional arts. In Shinbashi, where the arts are highly valued, geisha often specialize in one art form, but practice a variety, such as: tea ceremony, Japanese-style painting, kyogen (a type of traditional theater), ko’uta (a type of traditional ballad), and haiku.

Geisha are divided into two groups: tachikata who dance, and jikata who sing and play musical instruments. In Shinbashi three schools of dance are taught: Hanayagi school, Onoe school, and Nishikawa school. Tachikata specialize in one of these schools and receive direct training from one of the three iemoto (head of the school). This special environment reflects Shinbashi’s prosperous art scene. There are also two types of traditional music taught in Shinbashi: nagauta and kiyomoto. Jikata specialize in one of them and are taught shamisen, singing, and background music (joruri). In addition, iemoto of the Fukuhara school teaches the drums, flute, and hayashi style taiko.

Ryotei are high-end restaurants which serve traditional cuisine in private tatami rooms. There is more to a ryotei restaurant than just food – a carefully cultivated garden, beautiful floral arrangements, and exquisite works of art. The food is usually offered in courses, and through the presentation of dishes one can tell the prowess and experience of the chef. Furthermore, the ryotei restaurants in Shinbashi also provide geisha performances to entertain customers with music and dance. However, first-time customers must be accompanied by regular patrons.

Today there is a dazzling variety of shapes and sizes of bento lunch boxes. One of the most classical forms is the shokado bento which is a square box divided into four sections with a variety of dishes, often displayed in attractive little bowls in each section. It is said that the first owner of the famous ryotei restaurant Kitcho originated this style. These days it is served by all top ryotei, each with their own attractive features.

The Difference between Geisha and Maiko

Geisha (“art person”) are highly skilled in traditional arts, such as music, singing and dancing. Girls who are in training to become a geisha are called hangyoku (“half jewel”). In comparison, geisha in Kyoto are usually referred to as geiko (“art child”) and their trainees are called maiko (“dancing child”). Therefore Tokyo’s hangyoku can be considered the equivalent to Kyoto’s maiko.

* Different from Kyoto and other Hanamachi, no one under the age of 18 is allowed to become a geisha in Shinbashi. In addition, those under 20 years of age must have parental consent.